The most powerful influence over your circadian clock is light viewing, not sleep times.

how to rapidly set circadian clock:

- Within 30 min of waking up, 2+ min exposure to outdoor sunlight
Optional: add exercise, food or social exposure
- Around sunset, take 2+ min walk and view low solar angle
- After sunset, use dim and horizontal (not overhead) lights

vs grounded puff at 45-60%, low dair combos to pivot fsmash.
If puff DI/SDIs too high then you can react with dash JC tipper upsmash.
If puff DIs over the ledge you can FH dair.

From 60%+ a smash attack isn’t guaranteed depending on her DI but you can FH/DJ ff dair then techchase.
On platform stages, over this % range whether she will hit the platform depends on her DI. As such, it's best to assume that she won't and simply switch to a techchase in the (somewhat rare) case that you see she will clearly hit plat.
Posted by Alexander Nesler at 3:52 PM 1 comment:

this is what I do

if at any point they DI off stage:
SH off (double)shine

~60+:
The edgeguard from upthrow FH bair is easier than a plat techchase.

(general note, % ranges for followups off of upair are very similar to off of an upthrow)

Posted by Alexander Nesler at 3:51 PM No comments:

Soft Fair -> Dair:
From about 30-40%, Marth can true combo FH soft fair to dair. After the dair, if puff DIs to the stage, marth can techchase grab, and then pivot tipper fsmash puff for a kill. That means that with good execution, a FH soft fair at 30% can equal a kill! He can even combo a low tipper fair or a sideB to a soft fair.
After 40%, the dair will no longer connect vs combo DI but will connect if puff DIs badly, so depending on the position it might be a mixup with a raw dair. Puff can get out earlier with good sdi.

Dash SideB:
When puff combo DIs down and away, instead of reaching for a tipper aerial and ending the combo, it is better to dash a small extra distance and then sideB. After the sideB, marth doesn’t get a true followup without bad DI, but he does keep puff within reach of his disjoint and can reaction punish a commitment, including with a soft fair, so the expected value is significantly higher.

Posted by Alexander Nesler at 3:49 PM No comments:

Because puff is light, CC makes you slide too far to rest confidently past low %s.

These numbers assume no shield DI so there is some jump travel time. If you shield DI in so that you are right next to them after shieldstun and can rest them right away it’ll be a little easier than what is listed.

Puff is too short to rest, should grab or dair.

Posted by Alexander Nesler at 3:46 PM No comments:

When samus pressures puff's shield, you can reliably profit provided you have a good reaction.

• upB = upB has next to no shieldstun, so a direct punish depends entirely on if they can make it to a plat before you can after a reaction. With a good reaction and pursuit this is a rest.

Posted by Alexander Nesler at 3:45 PM No comments:

Fox's ledgedash is definitely the most broken technique in the game, but because the execution is tight there is a risk of SDing attached. Just how big this risk is depends on a number of moving parts, so it's a little bit complicated. In this post I will expand on the components involved, how they work together, and offer what I believe to be the optimal ledgedash methodology.

A ledgedash has 4 parts, Cliffcatch, Fall, Jump, and Airdodge. In order to get good galint, each of these needs to be timed appropriately. The closer they are to perfect, the greater risk that any one is performed too early and the ledgedash fails, at worst resulting in an SD, at best resulting in a ledgestand or another easily punishable action.

Cliffcatch:
When Fox grabs the ledge, he goes through 7f of cliffcatch animation. Afterward, he enters cliffwait. Starting on the second frame of cliffwait and not before Fox can release ledge. A perfect fall would give you a cliffwait frame counter readout of 0.

Fall
When Fox exists cliffwait he enters fall animation. He has to be in fall for at least 1f, so a perfect jump out of fall would give you a fall frame counter readout of 0. The longer fox falls, the lower he falls and the more invincibility he loses. Notably, if you press down to release ledge then the second frame onward of fall will be fast falled.

Jump
After falling, Fox needs to double jump toward the stage. Ideally, he does this as fast as possible in order to preserve height and invincibility. Depending on how far he fell, Fox will typically need to jump for 3 or more frames before airdodging. If everything preceding was perfect, this would give you a jump frame counter readout of 2.

Airdodge
The optimal airdodge angle is down and toward the stage at about 45 degrees (credit to kadano for the image). This angle will result in the best galint over the widest range of timings and ECB states, whereas other angles are all particular and will have striclty worse results (as will be demonstrated below). With the 45 down angle, the best possible ledgedash will result in 15f galint, which is insane.

ECB
Fox's ledgedash frame data changes per the animation preceding cliffcatch because it will influence his environmental collision box, or ECB. Some animations, such as a firestall, leave his ECB nice and small, but other animations, such as special fall, will make it significantly bigger. This will require Fox to jump higher before airdodging to avoid colliding his ECB against the side of the stage, resulting in an SD. More than anything other component, this complicates ledgedashing.

The above tables contain the in game result for combinations of fall duration, double jump duration, and airdodge angle (with a DJFF ECB). The numbers on the axis refer to the corresponding frame counter readout. As you can see, there is NO advantage to ledgedashing with a shallower WD-ish angle compared to a 45 down angle. It is quite terrible. Additionally, you can see on the lower tables how pressing down (thus getting a fast fall on frame 1 onward) results in similar galint but a much tighter execution demand. From this we can conclude that releasing without fast falling and airdodging at a a 45down airdodge angle is optimal.

Now let's look at the frame data for no ff, 45 down ledgedashes for different ECBs. 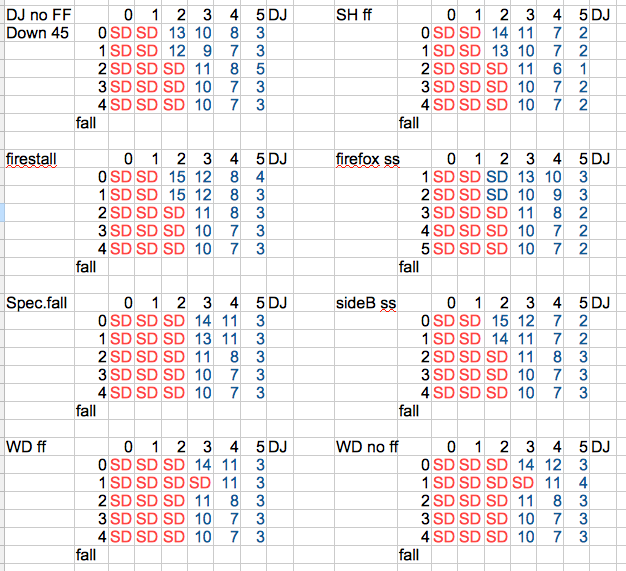 Now we can clearly see why ledgedashing feels so inconsistent. Pay particular attention to the WD and special fall ECBs. If you ledgedash with the perfect timing that would get 14 galint in another ECB, you are guaranteed to SD! But we can also see a clear pattern emerge. With the exception of WD ECBs, you are guaranteed a galint of 10 or better if you airdodge after DJ frame counter readout of 3 regardless of fall timing. The airdodge timing is, next to cliffwait, the most important component. Compare that to the ffall charts above, in which a single frame difference in fall can require you to delay your airdodge an extra two frames! In terms of consistency, no ff with a 45 down is clearly optimal.
- - -

Case Study: Me
But what kind of consistency is reasonable to expect? In order to come to a better understanding of what human consistency looks like, I decided to measure my own consistency at each component in frame counter.

Caveats: I am a puff main. Although I am somewhat technical, I've never practiced fox ledgedashing before. I recorded myself repeating each component for a short time period. That is to say, I would ledgedash but only focus on one particular readout at a time. According to what I've read on practice, combining them while preserving their individual accuracy is totally reasonable and just a matter of more practice but like I said I'm new to ledgedashes. At this time I am more interested in looking at the distribution and looking at how that culminates.

Cliffwait (target 1-2)
can be hard because it req such intimate knowledge of exactly when fox will grab the ledge. I practiced it from different firefox sweetspots to add a more realistic variance.
Range 1-4 (excluding a couple outliers that came from lack of exp)
Avg 1.5
Mode 1

Fall (target 0-1)
for this I tried with 3 different methods, Down input, Back input, and C-stick back input (claw).

Back Input
this felt really unintuitive, would take more practice to get tighter
Range 0-4
Avg 2.4
Mode 2

As expected, all of the above exercises demonstrated a normal distribution (i.e. bell curve).
For example, these are the data points for my C-back jumps look like this

This kind of shape, with a a mostly but not entirely 2f range was typical. I noticed that narrower shape (stronger mode) corresponded with more familiar inputs, but the range was still about more or less 3f.

That the standard distribution of a single input will likely span 3f is the most important takeaway from this data. I think that with a good amount of practice you can reasonably expect a 3f range with a particularly strong mode. With frame counter it is practical to single in on a mode and err to one side, but you won't be able to eliminate the edge of your distribution entirely, meaning that it is reasonable to expect consistent (95%+) 3f windows, but my experience shows 2f windows to be dubious. I would of course welcome anyone to try this out for for themselves, it just takes frame counter and a notebook.

Optimal Methodology
All of this lends to the following conclusions.

I think that the optimal methodology for Fox ledgedashes should maximize galint within 3f windows in which SDing is not possible. This precludes attempting DJ readouts of 2 (the 15 galint ledgedashes) as well as using down to release UNLESS you've practiced and verified that you have a 2f range, at which point the extra galint is worth going for. When practicing, a 2f range target to one side of an SD is very practical.

A theoretical best method for a more consistent ledgedash (with frame counter targets):
1) Switch to claw
2) C back (cliffwait target 1-2)
3) DJ (fall target 0-1)
3) airdodge 45 down toward the stage (jump target 3-4)

Posted by Alexander Nesler at 3:44 PM No comments:

This is an expanding text purported to catalogue and organize my thinking as it relates to melee. My opinions should change over time and I actively encourage corrections/discussion.

I do match analysis and coaching (variable rates).